How to Deal with Trapped Wind in the Chest

Excess intestinal gas is a common complaint but trapped wind in the chest much less so. Gas, by itself, can be uncomfortable and even painful but it's not a huge concern. Gas pain in the chest, though, requires a little bit more attention. Especially if it doesn't pass within a short amount of time! Trapped air in the chest can be a symptom of a few serious underlying conditions.

Causes and Symptoms of Gas Pain in the Chest

Everyone swallows air during eating, drinking, talking, or other activities. On some occasions, though, the air swallowed air can be more than the usual amount. This leads to an uncomfortable feeling. Nervousness and anxiety increase the rate of air intake and can lead to the trapped wind in the chest which may start to make a person uncomfortable. Feeling bloated, having a dry mouth, and a tendency to develop throat infections easily are associated with aerophagia.

An inability to digest certain food properly due to the lack of particular enzymes, allergic reactions, or just sensitivity to some ingredients can lead to gas formation. What does trapped gas in chest feel like? Most people complain of pain and being bloated. Common food allergies, such as lactose and gluten intolerance, can cause inflammation in the intestines and play havoc with the digestion.

The digestive efficiency of a person suffering from GERD (Gastro Esophageal Reflux Disorder) is compromised. The stomach acid travels up the esophagus, causing a burning sensation, bloating of the stomach, difficulty in breathing at night, and other symptoms. The excessive amount of gas being produced in the body is responsible for causing gas pains in these patients as well.

IBS (Inflammatory Bowel Syndrome) is a non-inflammatory disorder that targets the intestines and affects the digestive processes. Stress has been identified as one of the main reasons behind the occurrence of IBS and its frequent flare-ups. Patients suffer from abdominal pain, trapped wind in chest, cramps, diarrhea, or constipation.

Food poisoning is caused by eating food that has been infected with bacteria, parasites, or viruses. The onset of symptoms is usually severe and sudden. The commonly seen symptoms include nausea, fever, abdominal pain, trapped wind in the chest, blood in the stool, diarrhea, and vomiting. 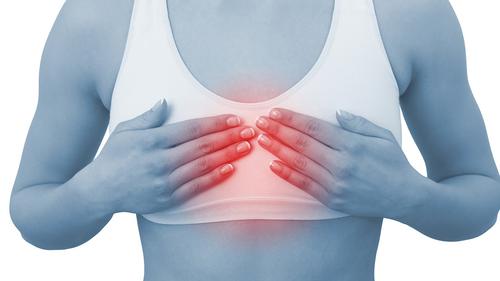 Treatment of Trapped Wind in the Chest

Different treatments are required for different causes. If the problem doesn't resolve after applying simple home remedies, then a visit to the hospital for further treatment is strongly advised.

Baking soda is believed to be able to provide a near-instant relief from trapped air. The recommended way to take it is by adding a teaspoon of baking soda to warm water and then sipping it slowly. Apple cider is also very effective at removing trapped air from the chest. People who take a few teaspoons of apple cider daily find that their digestion is better and that they feel less bloated.

Finding the right kind of food to eat, so that you don't end up feeling bloated, requires some trial and error. Cut out things that you feel aren't being properly digested and then try to identify the offending ingredients. Dairy and gluten are two common ingredients associated with indigestion. Lactose intolerance and gluten sensitivity are being recognized as contributors to intestinal inflammation in more and more cases.

Yoga, aerobics, or just physical activity, in general, helps to expel the trapped air out of the body. Certain positions like lying down on the bed and pushing your knees up to the chest are particularly efficient at removing air from the body.

Medication, if prescribed, will depend on the underlying condition. The use of antacids, antibiotics for food poisoning, medicines to dissolve gallstones, or maybe even a procedure to remove the gallbladder altogether are all possibilities that your doctor might consider.

Having trapped wind in the chest can be a difficult condition especially if there's a medical condition at the root of the problem. Simple measures taken at home can provide relief and prevent this from happening too often. Should the problem not subside or worsen, professional medical intervention may be required.